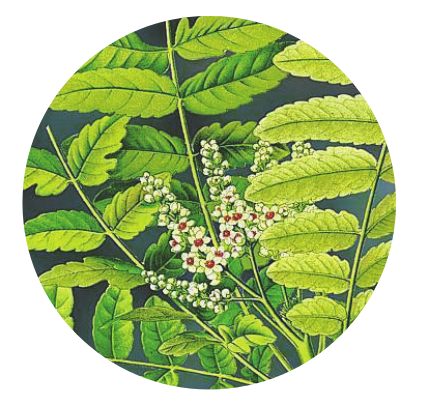 Boswellia is a genus that contains several species that can provide aromatic resins known as incense, a name derived from archaic Latin incensum, meaning, lit, burning, since it used to be burned in antiquity during propitiatory rites.

Incense is is also called Frankincense, that is, Franc incense, to distinguish it from other balsamic resinous substances that have been burnt for ritual or hygienic purposes, such as myrrh.

The resinous exudate obtained from Boswellia serrata (synonyms, B. glabra and B. thurifera) is what is considered to be more endowed with medicinal properties and is often used in the medical and pharmaceutical preparation of both popular and traditional medicine.

Originally from India and Pakistan, Boswellia serrata is a medium-sized tree that usually does not exceed 4-6 meters in height, with large hairline and large branched truncated bark, which breaks into thin paper-like scales.

Contrary to what we are used to, Boswellia goes dormant in warmer period, losing its leaves as deciduous trees do in warm climates. This behavior is called estivation. The small, cream-colored fragrant flowers are gathered in bunches of inflorescences called racemes; the fruit is a small drupe containing three heart-shaped seeds.

Among the medicinal properties of Boswellia serrata are well-known anti-inflammatory ones, particularly for  osteoarthritic diseases.

The oleoresin yielded by Boswellia serrata is a mixture of essential oils and resins. The resinous fraction is mainly composed of triterpenes and constitutes about 55% of the drug. It is represented by a mixture of pentacyclic triterpenes derived from boswellic acid and tetracyclic acryterpenes, beta-stentosterol and some flofabens. Small amounts of essential oils are present. Terpenes originate from the condensation of isoprene molecules from mevalonic acid, a secondary metabolite of photosynthesis. In relation to the number of whole isoprene molecules involved in synthesis, terpenes differ according to the number of carbon atoms present in the final molecule:

11-keto-beta-boswellic acid acts by selectively inhibiting an enzyme, the lipoxygenase, thereby preventing the synthesis of leukotrienes, that is, the chemical mediators that induce the inflammatory process are both acute and chronic in various inflammatory pathologies.

In addition, Boswellic acids block migration to the site of inflammation of a specific type of white blood cells, which produce elastase in the inflammed area, the proteolytic enzyme responsible for the destruction of collagen, and, therefore, of the tissues involved in the inflammatory process, in the inflamed zone; lacking elastase, the integrity of collagen is preserved and the deterioration of joint structures (cartilage, ligaments, tendons) is avoided, with overall prevention of joint degeneration.

Boswellia serrata is also recommended for some respiratory disturbances, and as a supporter of inflammatory bowel disease.

Boswellia serrata is also used for cosmetic products, which is beneficial for the oily skin, and to soothe the redness of particularly sensitive skin.

All activities carried out by Boswellic acids, with special regard to inflammatory activity, are carried out without side effects.

Let’s consider the Leukotriene cascade block, unlike those of typical NSAID prostaglandins (non-steroidal anti-inflammatory drugs, such as Aulin). This allows the activity carried out by Boswellia to protect the gastric activity and persist for prolonged periods of time.

Synthesis anti-inflammatory agents, in fact, act by blocking the production of prostaglandins, the substances responsible for pain and inflammation; but, because these substances also have a positive function, such as secretion of gastric mucus that protects stomach mucus, anti-inflammatory action is associated with marked gastro-activity (gastritis, ulcer), which is not the case for Boswellic acids, which do not act on the synthesis of prostaglandins. It seems that Boswellia serrata exercises a protective action against ulcer and pharmaceuticals that may harm gastric functions. Therefore, anti-inflammatory activity of Boswellic acids can be summarized as follows:

For all these considerations, many products are available as dietary supplements. However, despite some benefits, it is necessary to pay close attention to the contents of Boswellic acids, namely not to the total amount of extract, but to the amount of the active ingredient, or the aforementioned acids. In this case, it is good to stay at least about 65% titration.