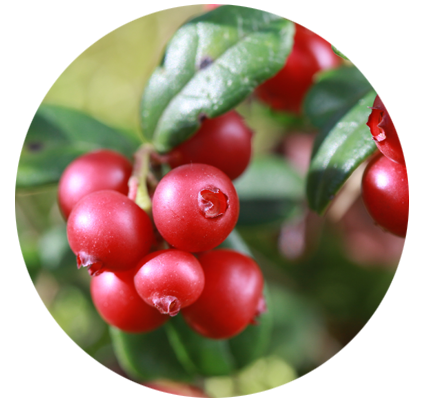 These fruits are usually used in the kitchen as jelly and composite. The juice produced by squeezing is used in traditional medicine as anti-inflammatory and urinary antibacterial in the management of simple infections.

Recent scientific studies have questioned the effectiveness of these juices in the prevention of urinary infections, Chocrane 2012: "Cranberry juice does not appear to have a significant benefit in preventing UTIs and may be unacceptable to consume in the long term."[1).

Although there is no official approval, there are several scientific studies that enhance the antibacterial properties of cranberry against the major pathogenic bacterium responsible for urinary infections, Escherichia coli and other fimbria bacteria.

Proantocianidines A and B: antibacterial or antioxidant action

Proanthocyanidins (PACs) are stable polyphenols that act as a plant defense against microbes and oxidative stress. There are two types of proanthocyanidins, type A, with a double bond between the polymers and with anti-adhesive power against bacteria, and type B with a single bond between the polymers and with antioxidant action.

Many fruits contain proanthocyanidins, but only a few contain type A; among them, cranberry is the fruit with the highest concentration of PACs1.

Fimbria bacteria such as Escherichia coli are able to adhere to the bladder mucosa by counteracting the discharge action caused by the urinary flow. This feature justifies the difficulty with which they are eradicated by the urinary environment.

Type A proanthocyanidins have shown the ability to reduce the adhesion of the bacterium to the mucosa.

They bind firmly to P-type (resistant mannose) fimbriae of free bacteria and prevent binding to the glycolipids of the urethra.

By failing to stick to the bladder wall, pathogens are more easily overwhelmed by urinary flow and eliminated during urination.

WHAT DOSAGE IS MORE EFFECTIVE?

After the release of the review published in Cochrane that questioned its effectiveness, cranberry juice was supplanted by products obtained by dehydration or extraction. There are extracts from various titrations ranging from 0.5% to 30% and can reach 80% in proanthocyanidins (PACs). 30% preparations are the most used because they are more cost-effective.

Most studies on cranberry tested the effectiveness of juice, so it was necessary to determine what is the most effective dry extract dose.

In 1994, Avorn J. et al. published on JAMA an important clinical work that demonstrated the clinical efficacy of 300 ml of cranberry juice on 153 elderly women with recurrent cystitis.

This work, whose data was then confirmed by other authors, was submitted to the Agence Française de Sécurité Sanitaire des Aliments (AFSSA) in order to officially express an opinion on the potential activities of cranberry.

In 2004, AFSSA issued a favorable opinion: “The product contributes to decreasing the adhesion capacity of certain E. coli uropathogenetic strains to the urinary tract walls”.

In the document, AFSSA stated that the activity was closely related to the presence of at least 36 mg of PAC.

Cranberry is considered safe for cystitis prevention, however, it should be noted that there could be a possible interaction with warfarin (Coumadin®), a fairly common anticoagulant used in the elderly population. Some serious episodes of interaction have been reported in  literature; there is also a fatal case, due to pericardial and gastrointestinal hemorrhage.

The possible hemorrhagic action of cranberry has prompted the Ministry of Health to release a statement to restrict its use, forbidding it to pregnant women.

Although it is considered natural therapy, it is advisable to follow the recommended dosages and not exceed consumption.